The benefits cut both ways: the children grow to be adults with an appreciation of NASA's contri­bution, and educators are given unique and fascinating tools to assist their teaching role.

Out at Canberra's Tidbinbilla Deep Space Complex yesterday, ACT school students aged between seven and 16 were given a sample of the challenges and rewards for scientists involved in planetary exploration.

The students' task was to build Lego robots which, in a simplified way, mimic the functions of the Mars rovers which will start exploring the surface of the lied Planet from early January.

More than just inter‑connecting building blocks, these specialised "Mission to Mars" Lego workshop kits allow the students to build and program little machines which can be operated remotely, with sensors responding to light, touch and temperature.

An education professor at Los Angeles's Pepperdine University, Gary Stager, is visiting Canberra to kick‑start the program at the invitation of the ACT Education Department's Centre for Teaching and Learning Technologies.

"Mission To Mars", Mr Stager says, is an ideal way of teaching kids how to solve problems in a way which stimulates their creativity. "And you couldn't find a better environment than this place to let kids' imaginations run wild," he said, gesturing out of the window to Tidbinbilla's main radio tele­scope, currently tracking the infinitesimal signals emanating from the Voyager space probe, now out beyond Pluto. "Students in Canberra are so incredibly lucky to have access to such an extraordinary and stimulating facility."

Mr Stager has been introducing, conducting and assessing various programs around the world for many years. He was involved in introducing student laptop programs into Australian classrooms 13 years ago.

"I've consulted with l.ego on and off on various projects for a few years and the materials the company is coming up with now for these sorts of things is fantastic," he said. "It makes math and science principles come alive in the kids' hands."

Each kit contains microprocessors which, when connected to a laptop computer. can be programmed to perform simple functions,

"All I did at the start was give a few ideas about the typical tasks that the Mars rovers will get up to and then challenged the students to see if they could build some- thing which does one or more of those things," he said.

From January 4, the Mars rovers "Opportunity" and Spirit" will be deployed from January 25 to explore the planet. The camera systems on the rovers will allow scientists to map the surface in three‑dimension and download the images and data on to the Internet.

A "Mission to Mars" teaching resource package, to be made available from November 14, will allow students' hand‑build robots to navigate using these images, and competitions will be set up. 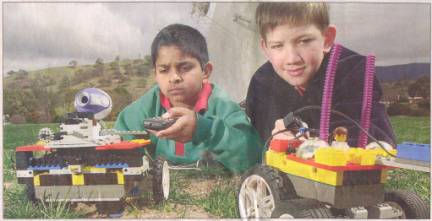